The recent heavy snowfall we have been experiencing in the United Kingdom has inspired me to write this blog post about an episode that took place in 1142 during a civil war known as the Anarchy (1139-53). In the winter of that year, the Empress Matilda succeeded in escaping from Oxford Castle, which was besieged by the forces of her enemy, King Stephen, through the ice and snow.[1] This daring escape prevented Stephen from capturing his rival, a move that would have given him a significant advantage in the conflict, and which may even have given him the opportunity of winning the war.

(The Marriage of Matilda to the Holy Roman Emperor Henry V)

The cause of the civil war was a dispute over the succession to Anglo-Norman realm. In November 1120, the only legitimate son of Henry I, William Adelin, drowned whilst crossing to England from Normandy, when his ship sank. The widowed king married Adeliza of Louvain in the hope of producing more children, but their marriage was a childless one. This meant that Henry’s only surviving legitimate child was his daughter Matilda, who he wished to succeed him. Matilda had married the Holy Roman Emperor, Henry V, in 1114, but the latter died in 1125. Nevertheless, even after the death of her first husband she continued to use the title ‘empress’.[2]

Matilda later married Geoffrey Plantagenet, eldest son of the count of Anjou, in 1128, and although their relationship was at first turbulent, due in part in a significant age difference (Matilda was 25 and Geoffrey was 13) they eventually developed an effective partnership. In early 1127, the king had extracted oaths of allegiance to his daughter from all the nobles and bishops then present at the royal court. Yet Henry’s relationship with his daughter and her husband was a fraught one. They sought to bolster their position in England and Normandy through securing control of strategic castles, which angered the king. This dispute contributed to the success of her cousin, Stephen of Blois, in rapidly seizing the throne after the death of Henry I in December 1135. However, the new ruler soon faced numerous threats and challenges, which he struggled to overcome. This provided the opportunity for Matilda to assert her claim to the throne through force. In 1139, she crossed to England and joined forces with her half-brother Robert of Gloucester.[3] 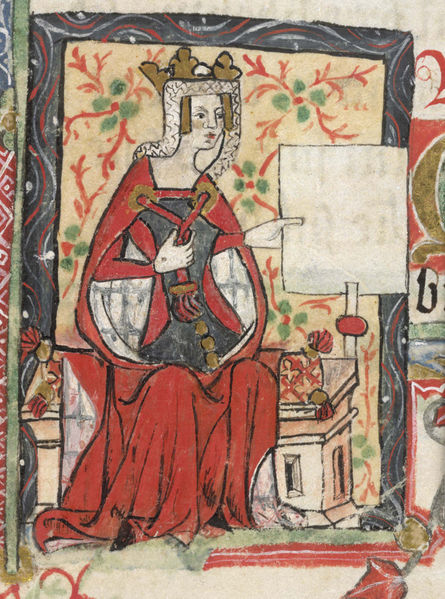 (Possible depiction of Matilda or of a relative)

Early in 1141, her supporters won a major victory against the royalists at the Battle of Lincoln, with King Stephen defeated and captured. This provided a golden opportunity for Matilda to win the conflict, with many of the king’s supporters deserting his cause. Yet she in turn suffered a major reversal of fortune due, in large part, to the efforts of Queen Matilda (Stephen’s wife). The Empress Matilda was forced to flee London and was besieged in Winchester, which she managed to escape from with great difficulty. During the retreat from the city, she was dealt a further blow when Robert of Gloucester was taken prisoner. Robert was so important to his sister’s cause that she was willing to ransom him for Stephen. In the following year, Stephen went on the offensive and succeeded in capturing Wareham and Cirencester. He then advanced with his army towards Oxford. The royalists soon overran the town and laid siege to the castle, where the Empress Matilda was residing.[4]

Oxford Castle had been built by Robert d’Oilly in c. 1071, who had been granted substantial estates in England by William the Conqueror after the Norman Conquest of 1066. It took the form of a motte and bailey castle, which incorporated timber buildings, including a tower situated on top of the motte. The tower, together with the other structures in the fortress, was later rebuilt in stone.[5] In the early twelfth century, Oxford was of strategic importance due to its location on the River Thames and as it was close to the castle of Wallingford. The latter was a key fortress held by the supporters of the Empress Matilda, which was unsuccessfully besieged on numerous occasions throughout the conflict by Stephen’s forces. The capture of Oxford would thereby allow the royalists to put pressure on the garrison of Wallingford Castle. William of Malmesbury, a monastic chronicler, records that on 26 September, Stephen’s army stormed the town of Oxford. Matilda and her household were confined to the castle where they were closely besieged by the royalists.[6] According to the anonymous author of the Gesta Stephani (Acts of Stephen), the castle was ‘impregnable’ and its tower was of a ‘great height’. However, the same author states that Stephen, by pursuing the siege for three months with ‘great resolution’, managed to reduce the garrison to the ‘extremity of hunger’. This shortage of food prompted the Empress Matilda to make the desperate attempt to flee from the castle.[7]

(Oxford Castle in the snow, photograph taken by Amanda Coombs)

The most vivid account of this event is provided by the Gesta Stephani, who describes her escape as having taken place in a ‘wonderous fashion’. Matilda was said to have left the castle with three knights of ‘ripe judgement’, with whom she walked through six miles of heavy snow and ice. She crossed the River Thames (which had evidently frozen over) and miraculously made her way through the royalist camp without being detected. Eventually after great exertions she reached the safety of Wallingford.[8] Another chronicler, Henry of Huntingdon, adds that she fled across the frozen Thames ‘wrapped in a white cloak’, which deceived the besiegers as it caused them to be ‘dazzled by the reflection of the snow’.[9] The author of the Anglo-Saxon Chronicle claims that she was lowered ‘from the tower by night with ropes’ during her flight from the castle.[10] William of Malmesbury describes her escape as being ‘a manifest miracle of God’. He attributes her success as being due to the negligence of the king’s soldiers who, due to fear of the arrival of Robert of Gloucester who was preparing to break the siege of the castle, had deserted the royalist army in large numbers. Yet he adds that he would describe the matter more thoroughly should he have ‘sure knowledge of it’, if he were to ever ‘learn the truth from those who were present’.[11] The garrison of the castle were forced to surrender a short time later, yet the Empress Matilda’s successful escape meant that the conflict continued unabated for a further ten years, with neither side able to achieve a significant advantage. The war was only finally ended by negotiations between her son, Henry Plantagenet (the future Henry II) and Stephen, in the summer of 1153.

Thomas Forester, ed., The Chronicle of Henry of Huntingdon. Comprising the History of England, from the Invasion of Julius Caesar to the Accession of Henry II. Also, the Acts of Stephen, King of England and Duke of Normandy (London: Henry G. Bohn, 1853).

1 – Charles Ricketts, ‘The Flight of Matilda from Oxford’, from Cassell’s History of England. From the Roman Invasion to the Wars of the Roses, volume 1 (London: Cassell and Company, Limited, 1909), p. 176.

3 – From Wikipedia. Enamel effigy of Geoffrey Plantagenet, Count of Anjou on his tomb, formerly at Le Mans Cathedral, now in the Museum of Archeology and History in Le Mans.

6 – From the BBC website. Photograph of a very snowy Oxford Castle taken by Amanda Coombs.

[1] For my published account of this event, see Dan Spencer, The Castle at War in Medieval England and Wales (Stroud: Amberley Publishing, 2018).

[9] Thomas Forester, ed., The Chronicle of Henry of Huntingdon. Comprising the History of England, from the Invasion of Julius Caesar to the Accession of Henry II. Also, the Acts of Stephen, King of England and Duke of Normandy (London: Henry G. Bohn, 1853), p. 281.