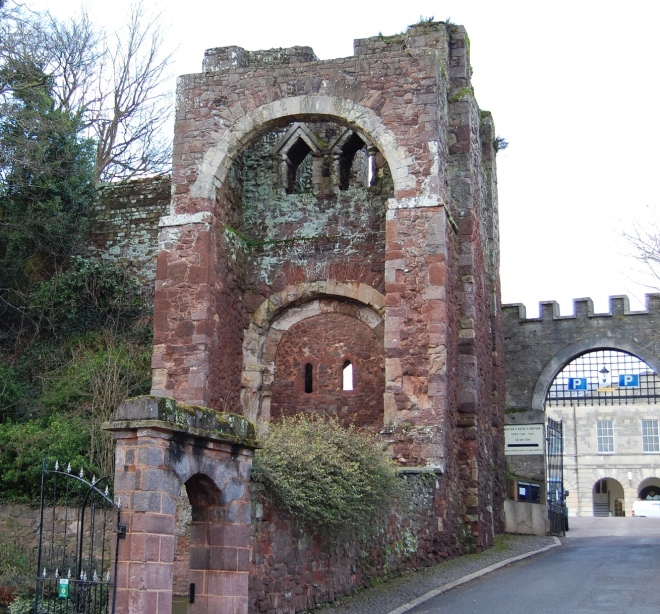 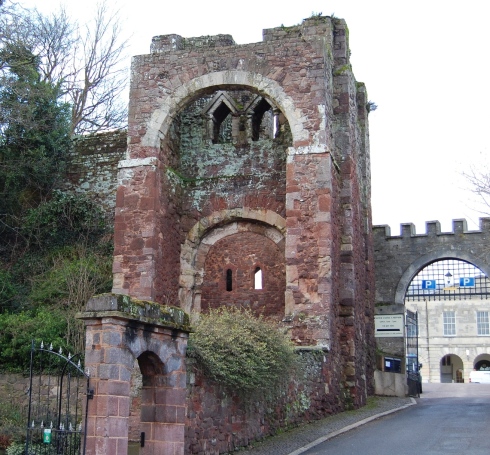 In mid-May 1136, King Stephen was preparing to cross to Normandy when he received news from the citizens of Exeter in Devon that the royal castle in the city had been seized by Baldwin de Redvers. The newly crowned king at once resolved to punish Baldwin and led his army to besiege the castle. This was the first of many rebellions that Stephen was to face during his turbulent reign, with the outbreak of a civil war, commonly known as the Anarchy, taking place three years later in 1139.[1] 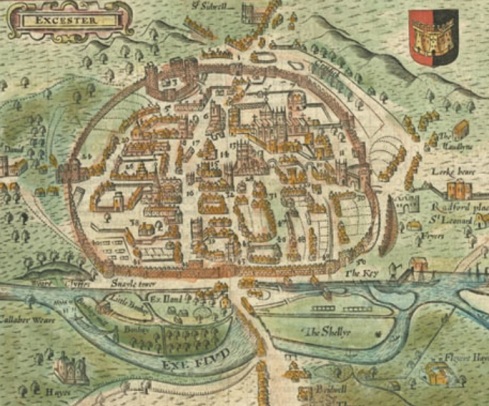 Securing control of the castle (also known as Rougemont) was vital for Stephen as Exeter was at that time one of the most important cities in the kingdom. The fortress had been built in the north-west corner of the walled city some sixty-eight years earlier on the site of a rocky hill, following a rebellion against William the Conqueror in 1068. It took the form of a timber palisade encircled by a ditch, which was entered via a stone gatehouse at first floor level. The latter still survives and is remarkable due to its architectural style which incorporates Anglo-Saxon features.[2] By the early twelfth century, the wall of the castle had been rebuilt in stone and was strengthened with towers made of limestone.[3] It was therefore a difficult fortress for a besieging army to capture. 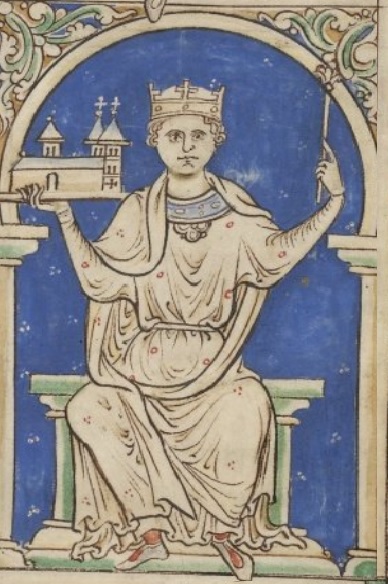 Yet Stephen needed to assert his authority in 1136 by punishing Baldwin as his own grasp on power was tenuous. He had become king six months earlier by responding quickly to the news of the death of his uncle, Henry I, and had rushed to England. On 22 December 1135 he was crowned as king at Westminster Abbey, being recognised as duke of Normandy a short time later. By doing so, he had put aside the claims of his older brother, Theobald count of Champagne, as well as his cousin, Matilda, the only surviving child of the deceased king. The latter in particular posed a threat to him, as she had been recognised by Henry I as his heir. Furthermore, her husband, Geoffrey Plantagenet, count of Anjou, was one of the most powerful rulers in northern France. Therefore, Baldwin’s rebellion needed to be dealt with swiftly before it could be exploited by a rival claimant to the throne.[4] 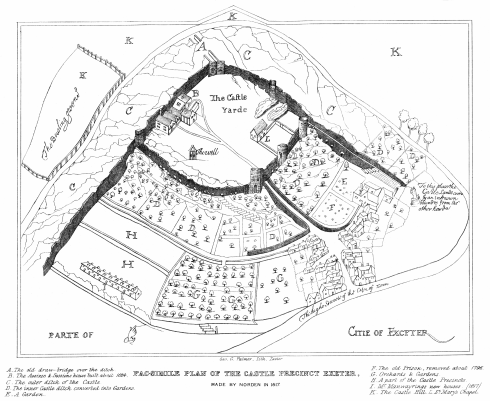 Most chronicle accounts of the siege are rather brief, such as Henry of Huntingdon’s account, but we are fortunate to have a detailed contemporary narrative provided by the anonymous author of the Gesta Stephani.[5] This was most probably written by a bishop, possibly Robert of Lewes, bishop of Bath, and gives a staunchly pro-royalist account of the siege (and other events). The Gesta Stephani records that the king was incensed by Baldwin’s action in taking control of Exeter castle, which he regarded as an open act of rebellion.  Stephen immediately sent a force of 200 cavalrymen to go on ahead to assist the citizens, whilst he came up more slowly with the royal army. Baldwin was careful to avoid being trapped behind the walls of the fortress but left his wife and children behind there for safekeeping. Once the king had arrived at the city, he ordered his soldiers to lay siege to the castle. The latter was said to have been defended by a strong force of men, who launched frequent sallies against the attackers and rained missile fire down upon them. Undaunted by this fierce resistance, the royalists were soon able to capture an outwork outside the castle and erected timber barriers to counter the forays of the garrison.[6] 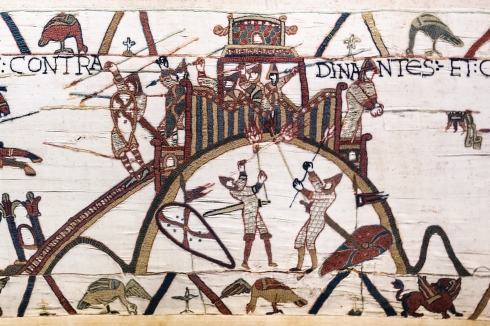 Stephen was said to have been tireless in overseeing the operation of the siege by day and night. The besiegers made frequent assaults against the garrison, employing slingers to rain stones on their heads and miners to dig under the defences. Despite these efforts, the defenders held firm and were able to resist these attacks. Furthermore, they were apparently reinforced by a group of men who infiltrated the royal camp before secretly gaining access to the castle. Eventually, however, after the siege had been in progress for three months, the defenders ran low on water, due to the drying up of the two wells in the fortress. This was attributed by the author of the Gesta Stephani to the ‘operation of divine power’ to chastise them and to force them to come to terms. There was also little prospect of receiving any further outside assistance. Resistance in the region had been quashed, with the royalists already having secured the surrender of another castle held by Baldwin’s men at Plympton. This dire situation prompted the garrison to send out envoys to seek terms with the king. At first the king was said to have sternly rejected their entreaties but was finally persuaded to change his mind by the intercession of his barons. The defenders were permitted to leave in safety and were left in possession of their lands and property, with the royalists taking control of the castle.[7] This decision was criticised by some of the chroniclers, with Henry of Huntingdon, writing with the benefit of knowing that civil war broke out in 1139, making the claim that if he had punished the defenders then ‘so many castles would not have been afterwards held against him’.[8] 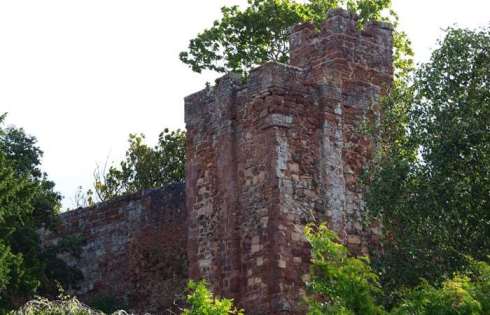 Sadly, little of Exeter Castle survives today, except for the Norman gatehouse and one of the towers. The castle was in a ruinous state by the fourteenth state with many of the surviving buildings demolished in the eighteenth century. 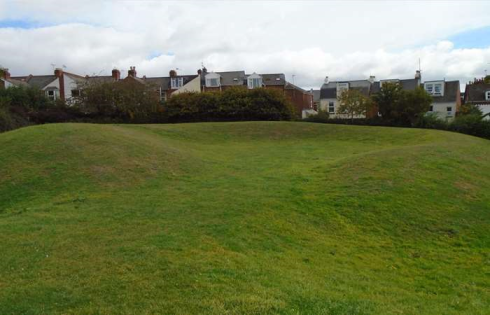 Surprisingly, the detailed account of the Gesta Stephani makes no reference to a type of fortification known as a siege or counter castle being employed by the attackers during the siege. Yet the remains of such a fortification are still visible today a short distance from Exeter Castle, known today as Danes Castle. Archaeological excavations of the site show that it was a small circular ringwork, surrounded by a ditch with a rampart. This fortification would have played an important part in blockading and putting pressure on the defenders during the siege.[9] 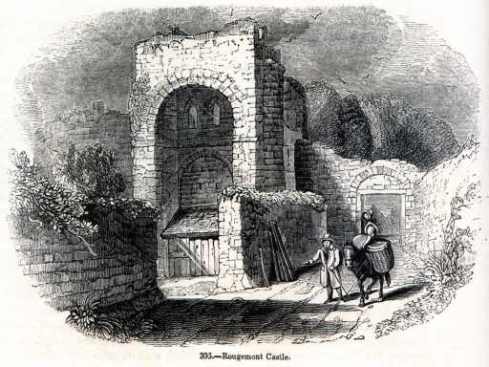 Thomas Forester, ed., The Chronicle of Henry of Huntingdon. Comprising the History of England, from the Invasion of Julius Caesar to the Accession of Henry II. Also, the Acts of Stephen, King of England and Duke of Normandy (London: Henry G. Bohn, 1853).

4 – From Wikipedia. Plan of the castle by John Norden, 1617, reproduced in George Oliver, History of the City of Exeter (London: Longman, Green, Longman, and Roberts, 1861).

5 – From Wikipedia. Author: Myrabella, Bayeux Tapestry, scene 19. Depiction of the siege of Dinan Castle in Brittany in 1065.

6 – Photograph of the north-west tower from Historic England, taken by Paul Adams.

[1] For my printed account of this event see, Dan Spencer, The Castle at War in Medieval England and Wales (Stroud: Amberley Publishing, 2018), pp. 54-5.

[5] For example, see Henry of Huntingdon’s account, Thomas Forester, ed., The Chronicle of Henry of Huntingdon. Comprising the History of England, from the Invasion of Julius Caesar to the Accession of Henry II. Also, the Acts of Stephen, King of England and Duke of Normandy (London: Henry G. Bohn, 1853), p. 265.