Oswestry in Shropshire was once an important border castle in the Welsh Marches. Its situation on the top of a natural mound meant that it would have dominated the surrounding landscape, with its main feature being a great tower (otherwise known as a keep). However, the systematic destruction of the site in the seventeenth century, following the First English Civil War, means that little now remains of the castle. Considering its ruined condition it is hard to imagine what it would have looked like during its heyday. Yet intriguing insights can be gleamed from a survey carried out at the close of the fourteenth century. 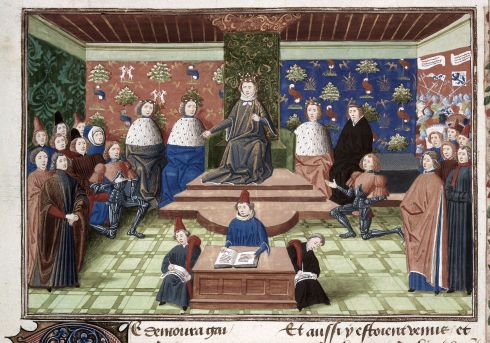 On 12 July 1397, Richard Fitzalan, earl of Arundel, was arrested by order of King Richard II and was sent in captivity to Carisbrooke Castle. Less than a month later he was put on trial for having committed treason against the king and after being found guilty was beheaded. His conviction for treason meant that all of his lands and possessions were forfeited to the crown, with writs sent out to royal officials to take control of these estates and to survey them, with their reports later being sent to the office of the Chancery. As one of the wealthiest magnates in the country this meant that numerous castles and manors passed into royal control. One of the lordships that was seized by the king’s officials was Oswestry in Shropshire.[1]

Oswestry Castle is first recorded in the Domesday Book survey of 1086 and was held for most of the Middle Ages by the FitzAlan family (who later became earls of Arundel). It was never a favoured residence of the FitzAlans, who were often absentee owners, and was instead run by their officials. The castle’s frontier location meant that it was often garrisoned during periods of conflict with the Welsh, but its military role had diminished by the late fourteenth century, following the conquest of Wales in the previous century. Nevertheless, it remained an important centre for local administration and justice.[2]

An inquisition into the lordship of Oswestry took place on 9 November.[3] It was presided over by three commissioners, John Spaigne, John Pygot the elder, clerk, Richard Kays, the king’s serjeant-at-arms and by the escheator for Shropshire, William Stokley. The latter being an official responsible for enforcing the feudal rights of the crown in the county. These men were responsible for carrying out inquisitions into forfeited estates throughout the region by questioning local jurors and had overseen an inquisition into the nearby lordship of Chirk three days earlier. They began their report by listing the value of the lordship of Oswestry and its manors on the day of the forfeiture of the earl, here recorded as having taken place on 18 July. All in all it was estimated to be worth the sizeable sum of approximately £380 per annum.

They then went on to survey the items kept at the castle and their locations throughout the buildings, namely: the wardrobe, great chamber, middle chamber, high chamber, constable’s hall, buttery, chapel, kitchen and larder. It is unclear where these places were but they were likely to have been in the most important part of the site, the great tower. The first place mentioned is the wardrobe where an assortment of arms and armour was kept. This consisted of nine longbows (five made of yew and four of holly), 600 arrows, five lance shafts with six heads, a gun, a barrel of gunpowder, 200 quarrels for crossbows, three poleaxes, three jacks (a type of padded leather armour), three pairs of plate gauntlets, three palets (a type of helmet), and a cord for a crossbow. Other items kept in the wardrobe included three pairs of fetters, six pairs of iron manacles with iron bolts and a collar with two iron shackles, undoubtedly intended for restraining prisoners kept at the castle. In the chambers mostly domestic items are listed: with a cupboard, two tables and four small benches in the great chamber; three chests, two benches and a table in the middle chamber; a hand mill and part of a trebuchet (a siege weapon) in the high chamber; and three tables, four trestles, three small benches, a basin with an ewer and a small chest in the constable’s hall.

The buttery (where bottles were stored), had a chest in bad condition, a bucket with an iron chain for the well, a barrel for keeping armour and an assortment of thirty-one keys for different locks. In the chapel there was a holy water vessel, a missal, a gilt chalice, two linen altar cloths with a frontal, two albs (a type of liturgical garment), two chasubles with their ornaments (another type of vestment) and, rather surprisingly, a hand mill for grinding corn. The only item recorded in the kitchen was a stone mortar with a wooden pestle, with the larder containing two tuns with six bushels of salt. All the listed items were recorded as having been transferred to the custody of Madoc Lloid who was serving as the lieutenant of Sir Robert de Legh, the royally appointed constable of the castle, for furnishing it. Other items said to have been present at Oswestry, recorded after the date of 18 July, included a salting trough, six chests, five small lead vats in bad condition, four pieces of broken lead, four tubs, a bolting pipe with a trough, a parcel of old timber, a brass pot, a spoon, a goblet, a grid iron in poor condition, four standards of worsted bearing the arms of Arundel in a bad state and a stool. 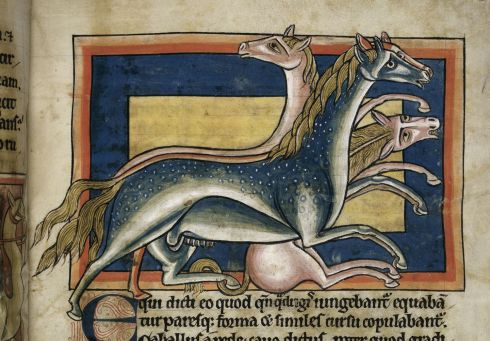 Yet it is also clear from the survey that many items and possessions had gone missing (or been stolen!) since the earl’s forfeiture. The jurors reported that other items consisting of three jacks, three palets, three pairs of plate gauntlets, two poleaxes, five longbows of yew, 228 arrows, a lance, six lance heads, two chests for holding bows and arrows, three crossbows, 100 quarrels, four lead vessels, two brass ports, an iron ‘vern’, a measure bound with iron, three pairs of fetters, a fetter lock and ladder had been present on 18 July but had since gone missing. It was added, perhaps rather ominously, that the former constables of the castle, Roger Glass and John de la Pole, and the previous keeper, William Banastre, would be answerable to the king for their absence. A number of horses were also kept at Oswestry, including a white stallion, black stallion and a running horse at the castle, in addition to sixteen male foals in the part of Upper Oswestry. These horses were said to have been fraudulently sold by a conspiracy by the earl’s officials in the lordship, his steward, John Whethales, and the keeper of the stud, Walter Usshere, in collusion with Sir Adam de Peshale, to a John Colteman. These men were alleged to have been responsible for stealing a further three mares and two foals. Large quantities of coins, said to have amounted to the considerable sum of £720, were allegedly taken from the castle by Thomas Harlyng the late earl’s receiver general (a senior official who was responsible for receiving and discharging the profits from his estates). The financial affairs of the lordship were also in some disorder with the arrears of rents and farms from the tenants said to have amounted to approximately £400.

The inventory provides a fascinating snapshot view of Oswestry at the end of the fourteenth century. Multiple rooms are recorded by name, which would otherwise be difficult to determine due to the heavily ruined state of the site. The sheer range of items recorded: military, domestic and religious reveal that a variety of activities took place at Oswestry. However, it is also apparent that the survey was by no means comprehensive. It is striking that no items of food or drink were recorded by the jurors, even though they must have been present at the castle, even if in small quantities. Therefore, it cannot be taken as a complete record of all the items kept at the castle, merely those ones that were considered worthy of being recorded by the surveyors. Allegations made against the earl’s officials also imply that his downfall had led to many of his possessions being stolen and a breakdown in the administration of the lordship, although it is of course possible that these claims were malicious.

3 – Map of Wales in the fourteenth century. Sourced from Wikipedia, author: XrysD