By 1283 Edward I of England had succeeded in conquering Wales, with the native Welsh dynasty of the house of Gwynedd all but wiped out. Yet the English conquerors were forced to contend with years of rebellions by the Welsh. One of these uprisings was led by Rhys ap Maredudd who took up arms against Edward I in 1287 by seizing control of Llandovery Castle.[1]

Rhys ap Maredudd’s decision to rebel came as a shock to the English authorities. He had previously been loyal to the Crown and had fought for Edward I in the wars waged against Llywelyn ap Gruffudd in 1277 and 1282-3. However, Rhys had been disappointed by the lack of rewards bestowed upon him in the post-war settlement. He was especially aggrieved by the king’s refusal to grant him ownership of his ancestral castle of Dinefwr, which had been a long term ambition of his. Judicial harassment by the justiciar of west Wales, Robert Tibetot, was another source of grievance. This prompted him to secretly plan an uprising against the English and on 8 June 1287 his forces stormed Llandovery Castle in a surprise attack.

Rhys then marched southwards through Carmarthenshire with his army capturing the castles of Carreg Cennen and Dinefwr. Afterwards he went eastwards towards Swansea, which was burnt, before heading north-west to Aberystwyth. The garrison of the castle succeeded in resisting the Welsh attacks, but part of the town was damaged. Due to the absence of the king, who was in south-west France, responsibility for suppressing the rebellion was left to his cousin, Edmund, earl of Cornwall, acting as regent of the realm. Significant resources were allocated to this task, with four armies assembled at Carmarthen. These forces were then ordered to advance on the rebel-held castles from four directions: from west Wales, Llanbadarn, Brecon and Monmouth. By 13 August they had reached Dryslywn and the siege of the castle began. 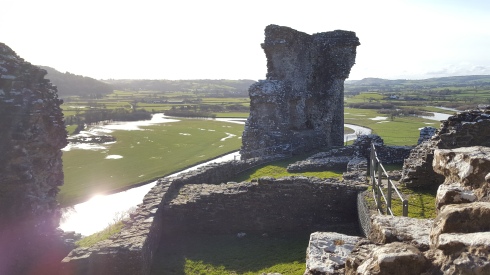 The strong natural defences of the site meant that it was a difficult fortress to capture. In addition to its masonry defences, the steepness of the hill upon which is was situated made approaching the castle difficult. The besiegers therefore decided to use a stone throwing siege weapon called a trebuchet against the defenders. They also employed miners to dig under the walls in an attempt to undermine their foundations. However, this venture ended in disaster when a mine prematurely collapsed whilst being inspected by a group of knights. Despite this setback, the defenders were cut off from outside assistance and gradually ran low on provisions. This prompted Rhys to lead a daring break out attempt from the castle, with most of his men managing to evade the besiegers. The now almost abandoned fortress was then captured by the English on 5 September.

Seemingly undaunted by this narrow escape, Rhys and his band of followers continued to launch hit and run raids throughout the region. Newcastle Elmlyn was captured by a surprise attack on 2 November and a short time later Llandovery was pillaged. The English were then forced to lay siege to Newcastle Emlyn in December, which they captured after a ten day siege. However, Rhys had once again managed to make his escape before the castle fell. To track down the fugitive the English authorities resorted to sending out groups of Welsh soldiers throughout the region. Eventually after years of being on the run he was betrayed to the authorities in the spring of 1292. Rhys was then sent to York in chains and after being convicted of treason was hanged, drawn and quartered.