(View from the south-east)

Flint Castle, the first of the great Edwardian castles to be built in north Wales, is situated on the estuary of the river Dee on a rocky outcrop. Its remains are less impressive than some of the other royal castles constructed in this Wales in this period, such as Conwy and Caernarfon, but still has some interesting features.

Flint was constructed by command of Edward I at the beginning of his war with the Welsh prince Llywelyn ap Gruffydd in 1277. The author of the Chronicle of the Princes notes that the king ‘fortified a court in Flint with huge ditches around it’, with more than £7,000 spent on the construction of the castle and town from 1277 to 1286 (to find out more see my book).

The castle has an outer and inner ward, with four towers surrounding the courtyard of the latter. The south-east tower was unusual in that it was much larger than the others and was separated from them by its own moat, which was accessed via drawbridge. 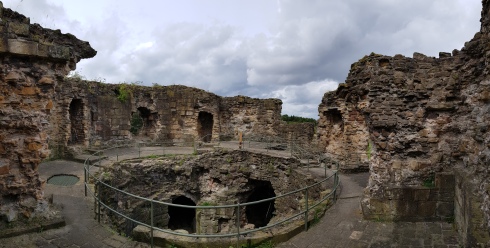 (Internal view of the south-east tower)

Flint was well maintained throughout the Late Middle Ages and it was where Richard II surrendered to his cousin Henry Bolingbroke in 1399. Flint was subsequently slighted by the Parliamentarians in the seventeenth century and became a ruin.

Flint is an unmanned site and free to visit (subject to opening hours). Substantial masonry remains and it is possible to explore most of the castle. Fantastic views can be obtained from the north-east tower, which can be climbed through using modern steps.

(view of the north-west tower from the north-east tower)

Accessible by car (with adjacent car park) and public transport