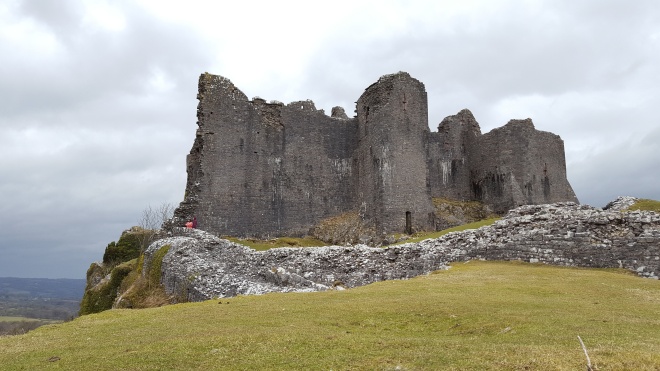 (View of the outer and inner ward from the south-east)

Carreg Cennen Castle has a stunning location, situated as it is on top of a limestone precipice, in a beautiful area close to the western boundary of the Brecon Beacons National Park in south Wales. Before taking you on a tour of the castle, I will begin by providing a brief overview of its history.

(Side view of the north-west tower looking westwards)

Carreg Cennen was originally constructed by the rulers of Deheubarth in the late twelfth or early thirteenth century, before later being captured by the forces of Edward I during his war against Llywelyn ap Gruffudd in 1277. It was subsequently granted to John Giffard who rebuilt the castle, which incorporated an outer and inner ward. Later it passed into the possession of the Duchy of Lancaster and afterwards into royal control following the succession of Henry IV in 1399. Carreg Cennen was besieged and captured by the supporters of Owain Glyndŵr in 1403. Following the suppression of the rebellion, extensive works were carried out to repair the fortress. Carreg Cennen was captured by the Yorkists during the Wars of the Roses in 1462, who slighted the castle with picks and crow-bars. In the nineteenth century, restorative work was carried out by its owner Earl Cawdor. The castle is currently privately owned but is managed by Cadw.

(Viewed from a distance from the east)

Carreg Cennen’s dramatic location on a limestone crag almost ninety metres above the River Cennen means that it visually dominates the surrounding area. It is therefore easy to appreciate the powerful impression that the castle must have made on contemporaries and how difficult it would have been to capture during a siege. Free parking is available a short distance from the entrance to a farm complex, which includes a restaurant and shop. From there a steep walk uphill leads to a ticket booth where tickets and guidebooks can be purchased. 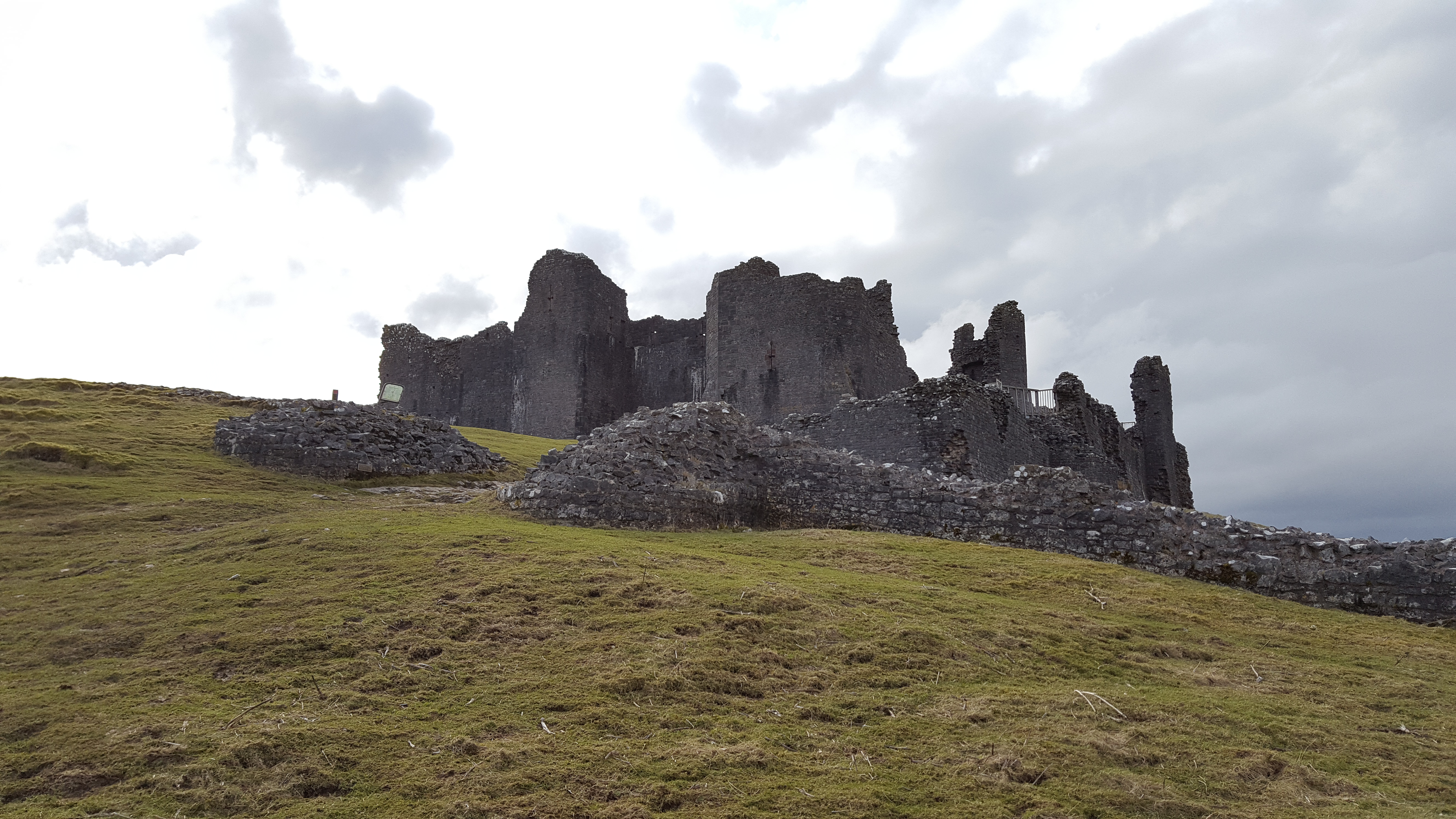 Little survives of the outer ward of the castle, other than the foundations of the wall, although one interesting feature is the remnants of a limekiln.

(External view of the inner ward from the north-east, with the bridge on the right)

Access to the inner ward is via an angled barbican that was originally protected by drawbridges, which leads to a three-storeyed gatehouse. The buildings of the courtyard include a hall, private chambers and a chapel. These structures are best preserved on the east side of the castle and it is possible to walk around part of the wall and towers. Stunning views of the surrounding area can be obtained from the top of the castle but be aware that it is very cold and windy up there! 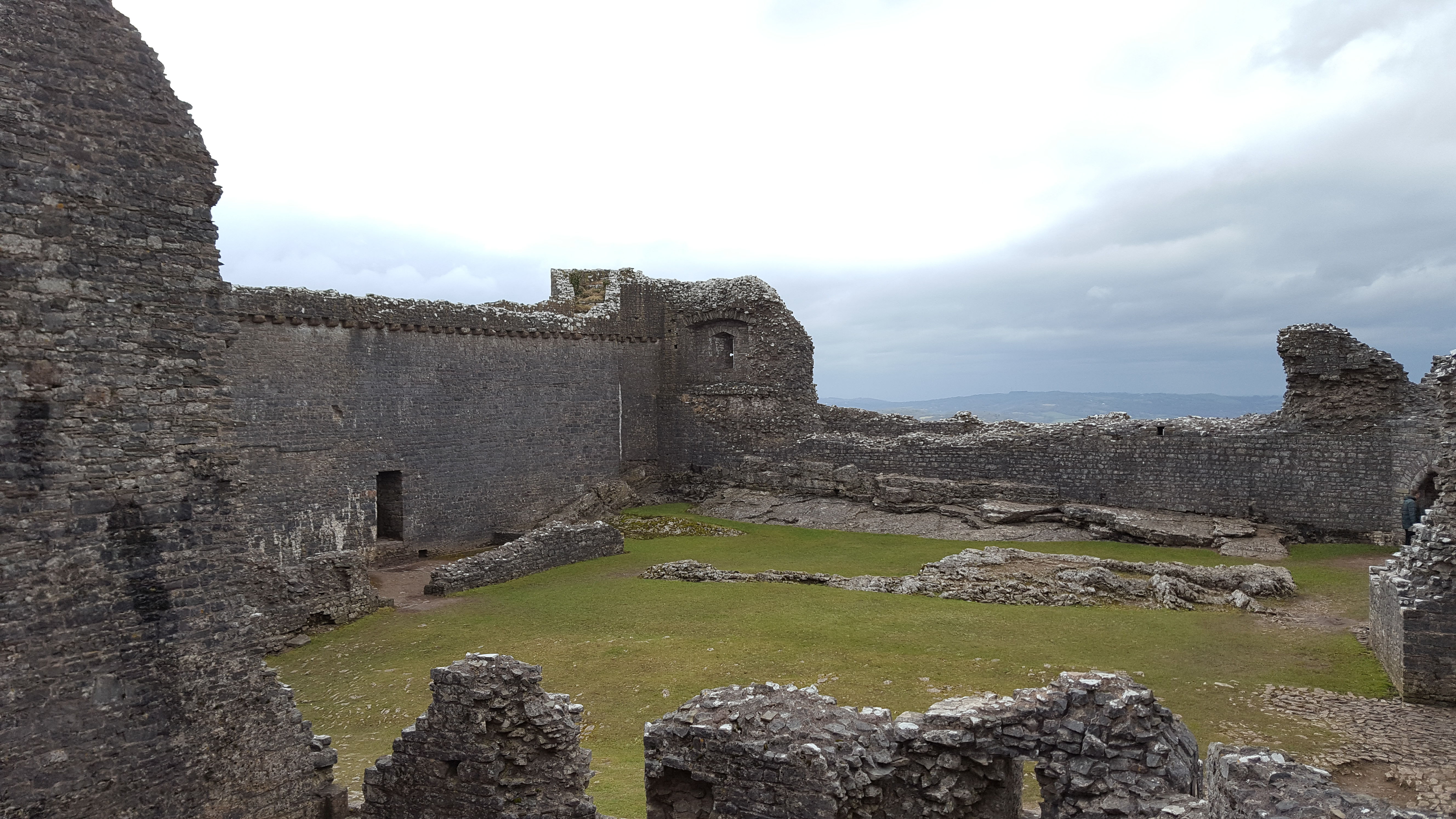 Intriguingly, in the south-east corner of the inner ward there is a set of stairs in a vaulted passage that leads down to a cave.

(The cave under the castle)

This concludes my tour of Carreg Cennen Castle. If you have any further suggestions or feedback then do feel free to leave them in the comments section below.

There is an entrance fee to the site, see here for more details.

All photographs taken by Dan Spencer ©